This tutorial is for an outdated version of Neutrino but most of the concepts are still applicable in the current version.

What is the MERN Stack

MVC is an architectural pattern for building software and web applications that consists of 3 parts, the Model, the View, and the Controller

Model - handles all data logic and directly interacts with the database. In this case, we will be using MongoDB and Mongoose, which is a library built on top of Mongo that we will use to define our model schema and interact with our Express server View - handles all client side logic, this is the React side of the application and will be what the user interacts with Controller - acts as an interface between the Model and View. It processes all requests, fetches data from the Model to send to the View, and takes in information from the View to update the Model

Neutrino uses MongoDB to power its database, in this tutorial, we will be using MongoDb Atlas, but you could run MongoDB locally as well if you wanted. We won't go over how to set up a new MongoDB Atlas cluster and database, but you can follow this tutorial to get started.

Setting Up the Models

If you're curious and want to check out their documentation, you can find it at neutrinojs.dev/docs

We want users to be able to have a name, username, and bio, as well as be able to register to our app, which will require us to define email and password parameters as well.

So, our params will be:

note: Here, we differentiate string from text, but text is nothing more than a string without character limits. It will also default to a textarea component in React.

We want users to be able to make posts, and posts to contain a few different parameters, such as the number of likes, title, content, and comments.

We want users to be able to comment on different posts, and we want these comments to be associated with the user that posted them.

When we discuss model relations, we're going to bring up terminology such as one-to-many or many-to-many, these are terms typically used in SQL databases, and the meaning doesn't really apply in the same way as it would in an SQL database. Nevertheless, they are still effective at conveying the hierarchy of our models and how they will interact with each other.

Step 2) Click on 'authentication', which will automatically create the username, email, and password parameters, and manually pass in the name:string and bio:text params by clicking on 'ADD PARAM'

Step 3) Create the Post and Comment models and pass in their required data parameters that we specified before. So for Post, it would be title:string and content:text, and for Comment, it would be content:string and user:string. After doing this, your models page should look like this: 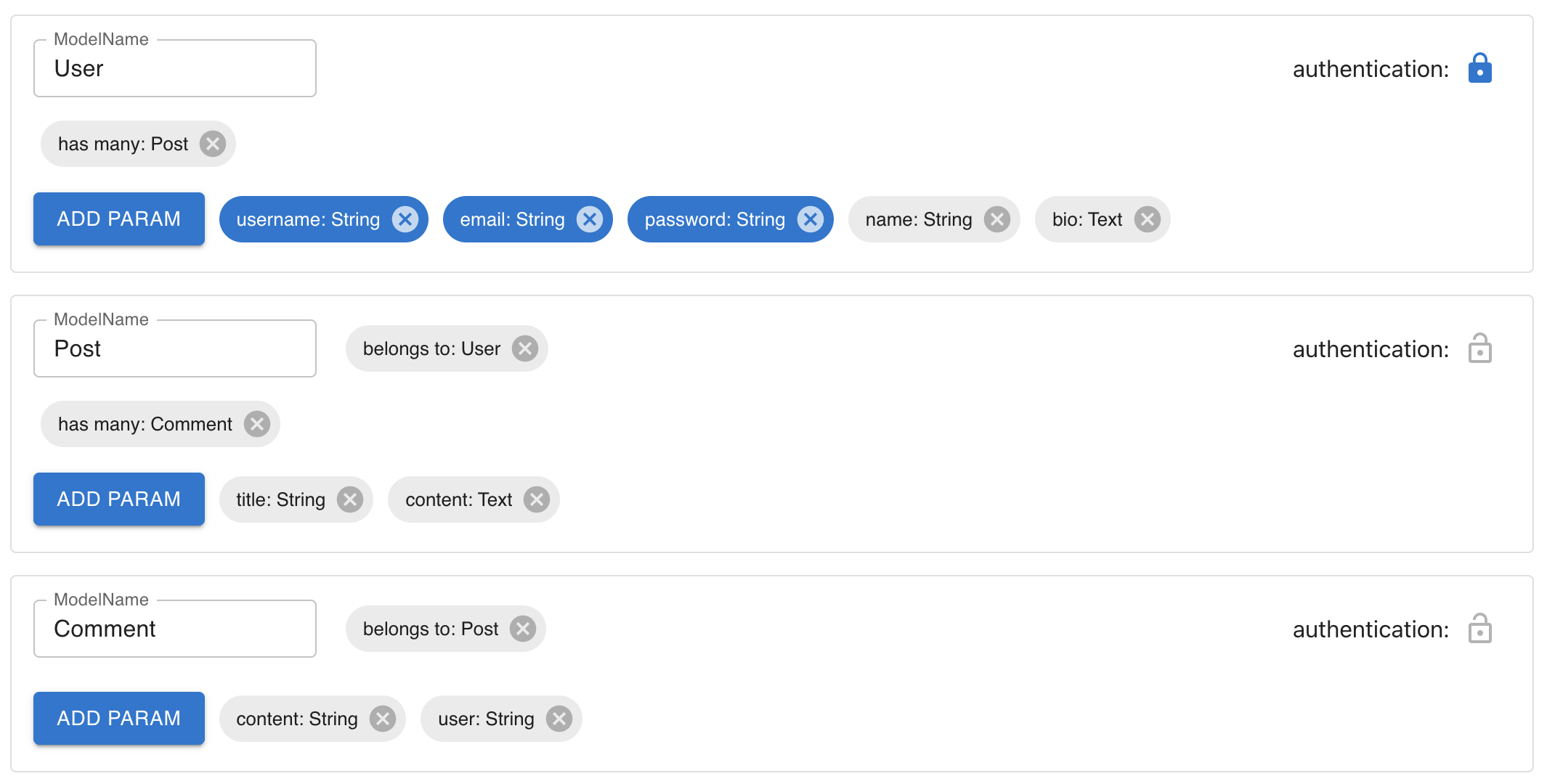 And well, the Relations page doesn't really do much yet, but if you did everything correctly, it should look like this:

Step 5) We enabled authentication by defining User as an authObject in the Models page, now we want to specify which routes we actually want and which ones we want to protect. 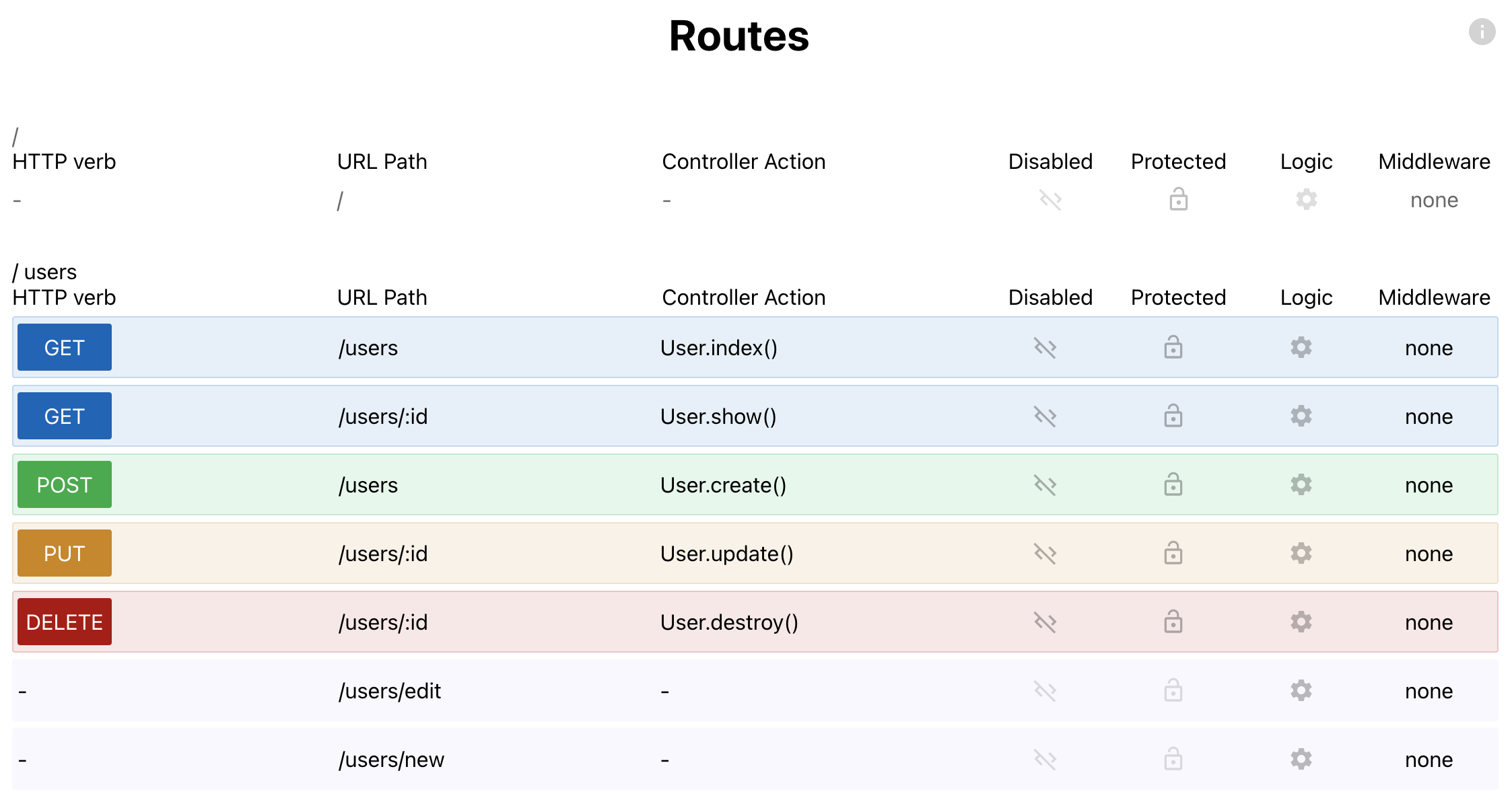 Neutrino scaffolds create all of the RESTful routes for each model by default, so for user it would be index, show, create, update, destroy, etc.

Step 5a) We clearly don't want each route available for every model, so let's start out by disabling a couple.

Step 5b) By enabling route protection, we are enabling two things:

We can split all routes into two main categories: public routes, accessible to anyone regardless of whether or not they're signed in, and private routes, which should only be accessible to logged in users.

Step 5c) Neutrino has a pretty neat feature of offering route logic templates for certain routes, these can be anything from hiding certain parameters such as passwords on GET requests, to verifying to see if a user is trying to modify another user's content.

Lets look at these route by route:

Let's understand what we just did:

Lets understand what this is doing:

We still haven't discussed how we will implement likes. This is partially by design since I didn't want to intimidate beginners with too much information, but now you've made it this far so let's implement likes.

Step 6) Lets go back to the Models page and add another has many: Post param for User and a has many: User param for Post

These routes will be helpful since they automatically provide the logic to add a post to the user's liked array and a user to a post's liked_by array (we can change the name of the route methods later if we want).

Step 7) Go to the Settings page and add your MongoDB Connection string if you have it. You could also do this later, you'll just have to insert it in the index.js page of your server before you can run your application.

Neutrino lets you create an account to save your projects which may be helpful in debugging or adding new features as your project grows. However, this is fully optional.

Step 8) Click on the EXPORT button on the sidebar and add a project name and your email and you're done! If you followed along correctly, Neutrino should download a zip folder containing all of your project's code

Extract the zip folder and open it up in your editor. Run the following commands in this order. cd server npm i node index.js note: If you haven't added a Mongo Connection String, you'll get the following error:

If everything went correctly, you should see the following page:

Nothing quite too interesting yet, but you can see that you can register a new user then log in with the specified username and password. You can also try to create a new post and comment (if you try to pass in anything other than your own user's id for the user parameter when creating a new comment you should get an error).

However, the whole frontend is pretty generic and we'll get around to fixing it. Let's fix up a couple of things in the backend first though.

Each object in the schema represents a parameter for the object, likes represents the Many-to-Many association we created with Posts, which is simply an array of Object IDs for different posts.

The latter code in UserSchema.virtual specifies our One-to-Many relationship with Post. Mongoose virtuals allow us to fetch the posts associated with the given user without actually storing them in the User document in the database, which will help performance.

You can read more about Mongoose virtuals here

Neutrino sometimes messes up the route methods whenever you have different relationships between the same two models (remember how we had both a One-to-Many and a Many-to-Many between User and Post), so make sure your User Controller has these two methods:

Let's also fix up the .populate() function in find() as Neutrino may have written a slight bug.

You can read more about Mongoose's populate function here

Your find function should look as follows:

Lets rename some variables in the addUser and dropUser methods. In $push and $pull, rename users to liked_by

note: Since we renamed the users array to liked_by in the Post model, we'll run into a few errors if we don't also change the naming in PostController.

The server index page defines all of our RESTful routes and pointes them to the appropriate controller method.

It also includes verifyJWT, a middleware function that checks for a valid JWT token to ensure the user is authenticated.

Including verifyJWT in a route will require the user to be authenticated before calling the controller function.

Make sure to include verifyJWT for the following routes:

Fixing Up the Front End

UserShow.js renders a pretty generic page, lets change a few things to make it look more like a profile page.

You can change the header to greet the user with their username rather than id, also, since we added logic for hiding the user's email and password, you can delete the password parameter and add a conditional to only render email if its not null.

As for the EDIT and DELETE buttons, we only want to display them if the currently authenticated user is the same user we're displaying.

To do so, first import useContext from react and include the following lines:

Now, we can access the signed in user if it exists by simply calling authUser

Wrap both buttons with the following conditional:

We can display liked posts by simply calling the user.likes array.

Again, this page is currently pretty generic, but we can fix it up a bit by changing the header and how we display some of the params.

What's a bit more interesting though is how we're dealing with likes.

Change the addUser and dropUser functions to the following:

All we're doing is changing the name of the function for readability and changing the user id to the id of the currently authenticated user (This will require you to import useContext UserContext define authUser like we did in UserShow).

If we only want to display the edit and delete buttons if the post belongs to the authenticated user, wrap the buttons in the following conditional:

This button will render depending on whether or not the currently authenticated user has already liked the post.

Therefore, we can create two new buttons for liking and unliking and wrap them in the following ternary opertor:

Lets understand what this is doing:

Okay there's a chance after reading everything and making the slight changes this project took a little over 30 minutes. But really, we had the bulk of our functionality up and running in only a couple of minutes due to Neutrino.

There's obviously a lot more that can be done fixing up the frontend and customizing it to look more like an actual blog app, but hopefully after following these examples with UserShow and PostShow, you gathered enough on your own to get started with the rest.